Greece is a state in the south of Europe 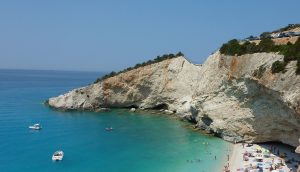 SHOPPING
Shops are open from 9:00 to 15:00 (in the summer – from 8:30) and from 17:30 to 20:30 (in summer – until 21:00). In tourist centers, shops can work until late evening and seven days a week.
In addition to fur coats and all kinds of fur products, it is possible to buy good knitwear, leather goods and leather shoes in the country.
In addition, they make high-quality and diverse jewelry of gold and silver. You can also buy statues of marble and alabaster, “red-figure” and “black-figure” vases, as well as other ceramics, lace and embroidery.
One of the main products that tourists buy in Greece is olive oil. You can buy it, as in supermarkets, and directly at the airport in the Duty-free shop. Also pay attention to such products: honey, olives, ouzo. Very often, these products replace tourists with souvenirs for friends and acquaintances.
WHERE TO STAY
Greek hotels are classified not by stars, but by letters (categories): Deluxe (5 *), A (4 *), B (3 *) and C (2 *). For sightseeing tours, hotels of categories B and C are usually offered – simple but clean and with everything you need in rooms (air conditioning, TV, etc.).
SEA AND BEACHES
The length of the coast of mainland Greece and its many islands is approximately 16 thousand kilometers. In the east, Greece is washed by the Aegean Sea, in the west – by the Ionian Sea, in the south – by the Mediterranean. Most beaches are sandy with white or black volcanic sand; there are also small pebble and rocky beaches.
All beaches are municipal, so you can use the sun beds and umbrellas for an additional fee (about 4 euros per day). Many hotels put free sunbeds and umbrellas for their guests.
Many beaches have a well-developed infrastructure: restaurants and cafes, equipment rental centers for water sports are at guests’ disposal. All beaches are allowed to sunbathe topless.
In 2008, 416 Greek beaches on almost the entire coast of the country were marked with the “Blue Flag” – a kind of international quality mark, which honored the cleanest beaches.
STORY
The geographical position of Greece was one of the determining factors of its historical and cultural development. The proximity to the regions where the ancient civilizations originated gave the Greeks the opportunity to enter into close cultural contacts with them.
In V-IV in BC. e. ancient greek civilization reached its apogee. It is no coincidence that this period of history is called classical.
For the first time, the Greek city-states lost their independence as a result of the victorious march of the Macedonian king Philip II. This was followed by the invasion of the Romans in the middle of the 2nd century. BC.
776 BC First Olympic Games.
594 BC The laws of Solon are the first democratic laws in the world.
VI-V centuries. BC. Greco-Persian Wars:
490 BC – Battle of Marathon.
480 BC – The Battle of Salamis.
479 BC – Battle of Plataeus.
443-429 BC. The reign of Pericles is the “golden age” of Athens.
Middle IV c. BC. The victory of the king of Macedonia Philip II over a coalition of southern Greek cities.
336-323 BC. The murder of Philip II, the proclamation of his son Alexander by the king. Alexander the Great conquers East Asia, Egypt, Persia, Central Asia and part of India.
146 BC Submission of Greece to Rome. 27 BC
The formation of the Roman province of Achaia in the territory of Greece.
49-58 years Sermon of the Apostle Paul in Thessaloniki, Corinth and Athens. The formation of early Christianity.
324-337 The victory of Christianity under Emperor Constantine the Great.
395-1453 The division of the Roman Empire into Western and Eastern (Byzantine). Greece is part of the Byzantine Empire.
500s Byzantium launched an attack on the barbarians and captured the entire coast of the Mediterranean.
7th century Byzantium becomes “more Greek.” Latin language is falling out of use. Distant provinces begin to fall away.
10-11 centuries. The Macedonian dynasty returned the lands selected by the Arabs, and established good neighborly relations with Russia. The “division of churches” when Constantinople “cursed” Rome, and the “curse” it was “lifted” only in 1967.
1204-1261 Capture by crusaders of Constantinople and the creation of the Latin Empire.
1453-1821 Turkish rule – the darkest period in the life of Greece. The country is in decline.
1821-1829 The national liberation revolution against the Turkish yoke. Russian-Turkish war (1828-1829). Russian defeat of the Ottoman Empire. The signing of the Adrianople Peace Treaty.
1830 London Conference. Russia, England and France declared Greece an independent state.
1832 Proclamation of Otto I of Bavaria as the first king of Greece.
1912-1913 Balkan wars. Greece returns the northern territories (Macedonia).
1917 The participation of Greece in the First World War on the side of the Entente.
1919-1921 Northern Convention. Greek military campaign