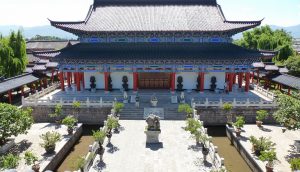 SHOPPING
In large government stores and food shops prices are fixed. Bargaining is possible and necessary in the markets, in most private shops, in street trays and even in some hotels, and the art of bargaining is often more important for the seller than his result, therefore, the better the buyer bargains, the more chances he has for good discounts. Even if the product has a price tag – this is nothing more than a “guide”, indicating the order of the purchase price. Sellers often on the move offer the goods of interest cheaper and are very annoying. If the “language barrier” does not allow bargaining, then you can use a calculator, which alternately dial numbers, or a piece of paper and a pen.
In large department stores, purchase is often accompanied by a large number of papers and checks, so you should ask the rules in advance.
The selection of souvenirs is huge, but many of them are of low quality. Chopsticks, beautiful porcelain, cups, lacquer boxes, prints and scroll cases can be bought at every step. Hangzhou and Suzhou are famous for their excellent tea and silk.
In large government stores and food shops prices are fixed. Markets should be cleverly bargained. Government stores work seven days a week from 9:30 to 20:30, private ones from 9:00 to 21:00, and often even longer. Markets usually open at 7:00 (some even at 4:00) and work until 10: 00-12: 00.
When buying tea and bulk products, we must bear in mind that the weight measure in China is “jin”, equal to about half a kilogram, and the price indicated corresponds to this particular weight measure.
WHERE TO STAY
There are hotels of world and local Chinese “chains” in the country. Hotels of famous chains are distinguished by high standards and the corresponding price level. Russian tourists are settled mainly in Chinese hotels 4-5 “stars.” Prices are lower, and the level of service is still very decent, as many Chinese hotels are managed by experienced foreign managers.
When paying bills in a hotel, a tourist will be charged another 10-18% of the total amount “for services”.
Up Last modified: 09/01/2010
SEA AND BEACHES
All beaches in China are municipal and non-gated, do not belong to hotels.
There are both paid beaches and free (most). The same situation is with beach equipment – umbrellas and sun beds.
The main beach recreation areas in China are the Yellow Sea and Hainan Island. The beaches here and there almost everywhere are sandy.
The Chinese do not like to sunbathe and mostly their beach holidays are hide and seek from the sun in tents.
HISTORY OF CHINA
Chinese civilization is one of the oldest in the world. According to Chinese scientists, her age can be five thousand years, while the available written sources cover a period of at least 3,500 years. The history of China is extremely rich and has almost 3700 years since the Shang Dynasty.
The Shan dynasty was founded in the 16th century BC. But, according to traditional Chinese history, it is considered to be the beginning of the formation of China from the Xia dynasty, which reigned from the 21st century BC.
16th century BC. China reached a high level of production in the field of sericulture, and the Western Zhou dynasty led the country to the development of society as a whole.
770 BC – the arrival of the feudal system due to the Eastern Zhou dynasty. In the era of this dynasty, marked by numerous reforms.
228 BC – construction of the Great Wall of China.
206-220 – the coming to power of the Han dynasty. Evidence of the success of the Han domestic policy was that it existed longer than any other ruling dynasty in Chinese history. The government and institutions of this dynasty served as an honored model for all subsequent ones. Moreover, the main ethnic group of Chinese by the name of the dynasty began to be called Han.
until the 4th century, a period of fragmentation into the Southern and Northern dynasties.
the end of the 6th century – the Sui dynasty unites the North and the South.
618-907 – The period of the Tang dynasty. It was the era of the Tang dynasty that is traditionally considered in China as the period of the country’s greatest power, when it was ahead of all countries of the world in its development.
907-960 – a period of fragmentation.
960-1279 – the rule of the Song Dynasty, the reunification of the South and the West.
the end of the 13th century – the conquest of China by the Mongols, the foundation of the Yuan dynasty.
1368-1644 – the rule of the Ming dynasty, which liberated the country from intervention. Ming was the last dynasty whose rulers were ethnic Chinese – after its fall, the Manchu Qing dynasty came to power in China.
1644-1911 – The rule of the Zinn dynasty – the last dynasty of monarchical China. It was founded in 1616 by the Manchu clan Aisin Gyr in the territory of modern northeastern China, then called Manchuria. For less than 30 years, all of China and part of Central Asia came under its authority.
1912 – the fall of the Qing Dynasty, the proclamation of China as a constitutional republic headed by President Sun Yatsenbsh.