Kingdom of Cambodia – a state in Southeast Asia 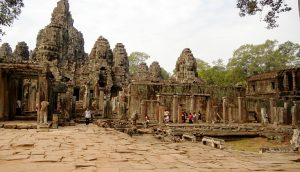 SHOPPING
Markets open early, around 6:00 and close by 17:00. The best time to visit them is in the morning, as at around noon most shops are already closing for a kind of dinner, reopening only around 15: 00-16: 00.
From Cambodia, you can bring silk and products from it, jewelry, wooden and wicker crafts by local craftsmen.
WHERE TO STAY
In recent years, the hotel business in Cambodia is experiencing a real boom. New guesthouses and hotels are being built, and tourists can choose for themselves accommodation options for every taste and budget. At the same time, ideas about Cambodia as a country where “everything is for one dollar” are gradually fading.
Fantastic cheapness is already behind, but Cambodia is still one of the most inexpensive countries in Asia. A tourist looking for minimal comfort with a clean bed, TV, air conditioning and in-room amenities will pay from $ 10 for a double room. Prices are slightly higher in Phnom Penh ($ 15-25) and slightly lower in other cities of the country.
Spartan hotels will cost $ 3-7, but the price for cheapness may be the noise of a nearby street, the need to go to a shared shower (not always clean), stale linen and no windows.
SEA AND BEACHES
Beach lovers will definitely be attracted to Cambodia by sandy beaches and tropical vegetation. The beaches are mostly curved and with a very small slope of the bottom.
STORY
The territory of modern Cambodia has long been inhabited by Khmers – the ancestors of the current Cambodians. The emergence of the first state formations on the territory of Cambodia belongs to the I century of our era.
At the beginning of the 9th century, King Jayavarman II (Jayavarman) managed to create a state that became a kind of precursor of modern Cambodia. In the X-XIII centuries, this state played a leading role on the Indochinese peninsula. In the middle of the XII century, in addition to present-day Cambodia, it included South Vietnam, Laos, and almost the entire territory of modern Thailand.
Since the end of the XIII century begins the weakening of the state, its territory is steadily reduced. In 1431, the troops of Siam captured and destroyed Angkor.
From the middle of the 18th century, Cambodia actually depended on its neighbors Siam and Vietnam, which annexed a significant part of the territory that had previously been part of the Cambodian state.
In 1863, Cambodia came under the control of France, which in 1884 turned it into its own colony, incorporating it into French Indochina.
During World War II from 1941 to 1945, Japanese troops were stationed in Cambodia. After the war, France regained its control over the country, but the struggle for independence unfolded in Cambodia, which ended with the proclamation of the independence of the Kingdom of Cambodia on November 9, 1953.
From the late 1960s to 1975, there was a civil war in the country, in which North Vietnam, South Vietnam and the United States actively intervened. In 1970 there was a military coup, as a result of which General Lon Nol came to power and proclaimed the creation of the Khmer Republic. In the same year, in order to support the Lon Nol government, which launched hostilities against the Cambodian Khmer Rouge Communists, the US and South Vietnamese armed forces invaded Cambodia.
In 1975, having won the civil war, the Khmer Rouge came to power, headed by Paul He. The country was imposed a course on the construction of “agrarian socialism”, which in fact turned into genocide against its own people (citizens, intellectuals, Buddhists, national minorities, just “superfluous”). According to various estimates, from 1 to 3 million inhabitants of the country, which at that time was called “Democratic Kampuchea”, were destroyed.
In 1978, the country’s economy was completely exhausted, and Pol Pot unleashed aggression against Vietnam. However, large groups of Khmer Rouge, dissatisfied with the repression, almost immediately came over to the Vietnamese side. In 1979, Vietnamese troops overthrew the Khmer Rouge regime. The final withdrawal of Vietnamese troops from Cambodia occurred in 1989, but the civil war in the country then continued for some time. Tacit support for the Khmer Rouge was provided by China, which saw in them a counterweight to the influence of Vietnam. The Khmer Rouge controlled areas bordering Thailand and periodically made forays into the interior of the country. They represented the Kampuchea at the UN.
In connection with the ongoing political crisis, the new Cambodian leader Hun Sen, who replaced the Vietnamese Heng Samrin, agreed to the UN mediation. As a result, the coalition administration of Cambodia was formed with the participation of leaders of the opposition forces, many major opposition figures were pardoned (the Khmer Rouge and supporters of Lon Nol), it was decided to return King Sihanouk. At the same time, the UN recognized the new administration of Cambodia.