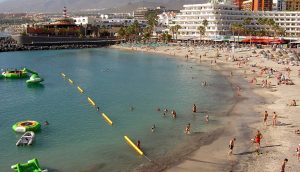 GASTRONOMY
Canarian cuisine is quite simple, it is based on high-quality local products, such as fresh fish, beef, pork, goat meat, local vegetables and tropical fruits.
On the First, a variety of vegetable soups are popular, and the Second is often served with jacket potatoes – Papas Arrugadas (papas arrugadas), which are boiled in very salty water until it evaporates, and as a result salt crystals settle on its skin.
Much attention in the Canary cuisine is paid to sauces, real, without chemical additives and preservatives.
Like in the whole of mainland Spain, paella is popular in the Canaries, a national rice dish with olive oil and various ingredients such as seafood, chicken, vegetables, etc.
In addition to traditional Canarian cuisine, the numerous and varied restaurants in the tourist centers of the islands offer multinational cuisine to suit all tastes. There are also many fast food outlets in the Canaries – McDonald’s, Pizza Hut, KFC and others.
Tips, as a rule, are already included in the bill, however, you can add 10% for good service, no one will refuse.
Among the alcohol deserves mention of strong and sweet amber wine Malvasia, produced from the 17th century, as well as white and dark rum.
SHOPPING IN CANARIES
The Canary Islands is a free economic zone, with low duties and low VAT. The cost of many goods here is lower, and sometimes very much, than in mainland Spain and Europe.
High-quality alcohol in local stores is cheaper here than in the Duty Free airport. Also presented a good selection of perfumes at very reasonable prices.
Traditional seasonal sales on the Canaries begin at the end of the 1st week of January (winter) and in the middle of July (summer). In the first days, discounts do not exceed 20–30%, but then they constantly grow and by the end of the sale they can reach 90%.
WHERE TO STAY
The tourist infrastructure in the Canaries began to develop very actively since the beginning of the 90s, thanks to which it is not difficult to find accommodation for almost every taste and budget: from economical self-catering apartments to the highest level of five-star hotels working on All Inclusive.
Unlike Turkey and Egypt, the “star” of Canary hotels always meets the stated category – the state follows the strict quality standards, and it must be admitted very successfully.
However, when booking accommodation, one should take into account that within the same category hotels can differ in the range of services, condition and equipment of the rooms, location and many others, which ultimately affects the price of the hotel and explains the different prices for staying in hotels of one “star” .
Hotels of the highest level in the Canary Islands are designated as “5 * Grand Suite.”
If the hotel category has the word “Super” (for example, 4 * Super), this means that in many ways its level exceeds the assigned official star rating, but for some reason it still cannot get a higher star rating.
Most of all on the islands of hotels of categories 4 * and 3 *, then go 2 * and only then 5 *.
The category of aparthotels is usually indicated by the number of “keys”, but sometimes also “stars”. Maximum – 4 stars or key.
The maid can leave a one-time tip of 5-10 € (under the plate with her name, which is usually not difficult to find in the bathroom).
SEA AND BEACHES
All beaches in the Canary Islands are municipal, that is, free. You only need to pay for the use of sunbeds and umbrellas, if you want to use them.
Some islands of the Canary archipelago are more fortunate with good beaches, and some are not at all lucky.
Much of the coast of Tenerife – the rocks, but still there are many beaches, among which there are pebbly and sandy. Beaches are both with light sand, and with dark volcanic sand.
On Gran Canaria there are beaches with light sand, there are with gray sand. The real “pearl” of the island are sand dunes, with the purest golden sand and well-maintained five-kilometer beach.
La Graciosa is famous for its magnificent long beaches with golden sand.
There are not many beaches on Lanzarote, they are all with light sand and occupy only 16.5 kilometers from the island’s 213-kilometer coast, the rest are rocks.
The coast on the island of La Palma is mostly rocky, so there are few good beaches here.
On La Gomera, the coast is mostly rocky and steep, there are quite a few beaches, but mostly it is rather narrow, covered with dark volcanic sand or stones.
There are no beaches with light sand on El Hierro, there are only a few not very large beaches with black volcanic sand.
Most of all lucky with the beaches of Fuerteventura, they are here with fine light sand, many kilometers wide and not crowded.