Malta – an island nation in southern Europe in the Maltese archipelago 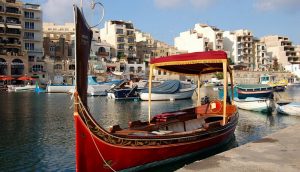 SHOPPING
Typically, shops are open from 9:00 to 19:00, on Saturdays until 20:00 (lunchtime, or siesta, lasts 3-4 hours). In busy tourist centers, many shops are open until 22:00. On Sundays, most shops are closed, with the exception of some souvenir and newspaper shops.
From Malta you can bring weaving and pottery, handmade lace, Maltese wines, original Maltese chess (the queen is without a crown, because the knights of the Order of Malta made a vow of celibacy), door handles (they say there are no two identical handles in Malta).
WHERE TO STAY
The highest quality service – in expensive five star hotels, the lower the category, the easier the service. In most three-star hotels, breakfasts are not шведский buffet ’, but à la carte. All inclusive is absent, the exception is Hotel Fortina Spa Resort with thalassotherapy. In addition, not all hotels in Malta have their own beaches and not all beaches are sandy.
SEA AND BEACHES
All local beaches can be divided into several categories:
By type of coating, they are divided into sandy, stony and pebble. Sand can be found in Malta in several colors — white (like Mellieha Bay) red (like Ramla Bay, Gozo) or pinkish (loose Perched Beach).
Where the coastal rocks were bare to a layer of globigerin limestone – a smooth honey-colored or amber-colored stone – rocky beaches appeared. You can enter the water on them both along the ladders and just diving from the rocks.
As for pebble, in most cases they are located at the mouth of the submerged valleys (for example, Mgarr ish-Shini on Gozo).
The degree of equipment of various types of amenities beaches are divided into “civilized” and “wild” (the second in Malta more). At first, you can rent sun beds, umbrellas and water sports equipment, as well as a snack at a beach kiosk or cafe. On the second, you have to carry everything with you …
In addition, there are also the so-called “beach clubs” (beach club) owned by hotels and some schools of English, where guests or students can spend time.
List of sandy beaches (island of Malta):
Armier Bay, Għajn Tuffieħa Bay, Ġnejna Bay, Golden Bay, Little Armier Bay, Mellieħa Bay, Paradise Bay, Perched Beach, Pretty Bay, St. Petersburg George’s Bay, St. Thomas ’Bay
List of rocky beaches (island of Malta):
Buġibba rocky beaches, Għar Lapsi, Marsaskala Bay, Mġiebaħ, St. Peter’s Pool, Sliema rocky beaches, Wied iż-Żurrieq
List of pebbly beaches (Malta Island):
Fomm ir-Riħ, Mistra Bay
STORY
Malta, located in the center of sea routes from Europe to Asia and Africa, has long attracted the conquerors.
In the 8th century BC e. The Phoenicians are beginning to colonize Malta and almost simultaneously the Greeks. Later it became part of the Persian Empire. In the IV. BC e. – XIII century. n e. it was alternately seized by the Carthaginians, the Romans, Byzantium, the Arabs, the Normans, and the Spaniards.
In 1530, Emperor Charles V granted Malta the spiritual-knightly Order of the Johannites, which has since received the name of the Order of Malta. But the power of the knights weakened over the years.
In 1798, Napoleon’s fleet captured the capital of the state, Valetta, after the knights refused to provide him with fresh water. On the island, Napoleon established a liberal legal system similar to the one that developed in France after the revolution; it replaced the archaic feudal legal system that existed on the island until then. Napoleon freed 2,000 Muslim slaves contained on the island.
On November 29, 1798, the Russian Emperor Paul I was awarded the title of Grand Master of the Order, and in December 16 of the same year, the knights elected the Russian monarch the Grand Master of the Order of Malta. The emblem of the Order was included in the State Emblem of Russia. But Emperor Alexander I in 1801 resigned the title of Grand Master and abolished the image of the Maltese Cross in the Russian State Emblem, and in 1817 the Order in the Russian Empire ceased to exist.
Under the terms of the Paris Peace of 1814, Malta was transferred to Great Britain. The British turned it into their colony and naval base.
In 1921, Malta gained self-government.
During the Second World War, Malta heroically opposed the raids of Italian and German aviation while in air and sea blockade.
In 1964 – Malta gained independence from Great Britain; The republic was proclaimed from 1974, but until 1979, when the last British naval base was liquidated in Malta, the Queen of England was still considered the head of state.
In 2004, Malta joined the European Union, which was confirmed by a referendum held in 2003.
RECOMMENDATIONS AND ADVICE
It is forbidden to appear on public beaches without the top of the swimsuit or without any swimwear.