Georgia – a state in the Caucasus on the Black Sea coast 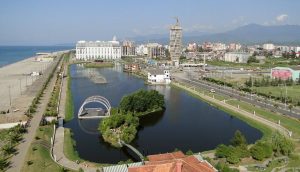 SHOPPING
Open from 9.00 to 19.00, a large number of shops and supermarkets work around the clock. Fairs and markets operate from 6.00-7.00 to 16.00-18.00 seven days a week, the most brisk trade takes place in the morning.
Public and state organizations are closed on Saturdays and Sundays, private establishments often work on an individual schedule.
The main objectives of shopping is, of course, wine, various trinkets and antiques. Also very popular: carpets, paintings, decorations (Georgian enamel, for example), and ceramics.
WHERE TO STAY
Georgia, once one of the main tourist destinations of the former USSR, is now in a deep crisis in the field of reception and accommodation of tourists. Most of the large hotels have not been repaired for decades, the magnificent guesthouses and holiday homes are completely neglected and neglected. The problem is aggravated by the issue of refugees from hot spots, tens of thousands of whom were accommodated in hotels throughout Georgia and this issue has not been resolved to this day. In fact, at present, modern international-class hotels exist only in Tbilisi, they are very expensive and obviously not enough. Small private hotels and zimmer appeared in all major cities of the country, but the cost of living in them is often clearly too high and does not correspond to the quality of the services offered. Often, even in a middle-class hotel, costing $ 70-80, and a claim to European standards, there may not be hot water, burnt out light bulbs, and insects in the bathroom. At the same time, it is perfectly realistic to find old, but in excellent condition hotels at a price of $ 15-20, retaining all the necessary benefits of civilization. The largest choice of accommodation is available in Tbilisi, Borjomi, Batumi, Kobuleti. Many new hotels are being built in the winter resorts of Bakuriani, Gudauri.
The private sector is especially developed in the resort area of ​​Batumi – Kobuleti – Poti. Prices are usually much lower than in hotels. It is important to remember that in most cities of Georgia there are big problems with water supply. Often water is supplied at certain hours and only cold. Electric boilers are not available everywhere. All these things should be clarified in advance.
Thus, the choice of place of residence should be approached selectively, considering each option individually.
SEA AND BEACHES
Most beaches are pebbly, and the level of the bottom quickly falls from the coast. Swimming in the sea with waves of great strength and winds of more than three points is simply dangerous, since the coast is in most cases uncomfortable. Most seaside health resorts have long since decayed, so the cleanliness of the beaches is almost not supported (except for the resorts of Adjara and Abkhazia, where the coast is still being cleaned).
STORY
Archaeological evidence suggests that Georgia is one of the territories where the man of the ancient stone age lived.
In the III. BC e. in Eastern Georgia, the Kartli (Iberian) kingdom was formed with the capital Mtskheta, which united almost all the Georgian lands. The Kingdom of Kartli did not withstand the rapid onslaught of the iron legions headed by Pompey, and obeyed Rome.
In the III-IV centuries. The situation has also changed in the western Georgia adjacent to the Black Sea, where a strong Laz (New Egris) kingdom was formed.
Announcement of Christianity official religion in the first half of IV. in Kartli and at the beginning of the VI. in Lazika, it promoted the convergence of certain parts of Georgia and the widespread use of Georgian writing, which, according to the assumption of some scholars, was formed even before our time.
In 523, the Sassanians managed to seize Eastern Georgia. As for Western Georgia, it remained under the rule of Byzantium.
In the second half of VII century. Georgia was subjected to a new invasion, this time by the Arab hordes, and was forced to submit to the caliphate.
From the middle of the 8th century begins the conquest of Arab-occupied lands. To the beginning of the X century. almost the whole country, excluding Tbilisi and the adjacent areas (Tbilisi Emirate), was liberated from the invaders. By this time, feudalism had finally won in Georgia.
A new great misfortune struck Georgia in the 11th century. The invasion of the Seljuk Turks began. The invasion was accompanied by the extermination of many people, the destruction of cities and villages. The Georgian King David IV (1089-1125), nicknamed by the people of David the Builder, played a prominent role in the struggle against the Turks.
Georgia reached its greatest power in 1184-1213. (the period of the reign of the great-granddaughter of David the Builder, Queen Tamara). By the end of the reign of Tamara in the result of victorious campaigns, Georgia expanded, becoming one of the largest and most powerful states in the whole of Near East Asia.
In the 30s of the XIII century. began the invasion of the Mongol hordes. The Mongols conquered the eastern and southern parts of the country. However, thanks to the heroic resistance of the Georgian people, the Mongols did not succeed in subjugating Western Georgia.