Kenya is a country in East Africa. 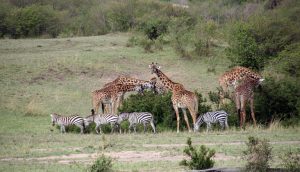 SHOPPING
Kenyan products are as diverse and unique as Kenya itself. Here you will find traditional handicrafts, excellent weaving, amazing wood and bone carvings, fantastic fabrics and jewelry, as well as musical instruments.
In the capital of Kenya, it is very profitable to buy precious stones, especially malachite, tanzanite, blue agate and blue diamond. Shops usually operate from 8:30 to 12:30 and from 14:00 to 17:00 from Monday to Friday. On Saturdays from 8:30 to 12:30. Many stores focused on foreign tourists work without lunch until 19: 00-20: 00.
Do not hesitate to bargain – this is common practice.
WHERE TO STAY
Hotels in the usual sense of the word are in cities, primarily in Nairobi (city hotels are presented here) and Mombasa (beach hotels). But during a night safari stay in the so-called lodges (Lodge) or camps (Camp). These are hotels that are located either within the National Parks or near the National Parks. Their distinctive feature is that they outwardly resemble traditional dwellings of local residents, organically fit into the surrounding landscape, are built of environmentally friendly materials and at the same time meet all the rules of comfort and safety.
Lodges, as a rule, are detached bungalows (stone or wooden houses with a thatched roof). They have a reception, rooms, restaurants, etc. Tented Camps are when the rooms are located in stationary tents, where, as in the lodges, there is everything that in the room of an ordinary hotel – one double or two single beds, a bathroom with toilet, sink and shower with hot and cold water and all toiletries.
There are just camps. These are tents that carry with
themselves during the so-called camping safari and smash the night in specially designated areas. In this case, convenience, as they say, – in the yard. Camping safari is the most affordable, but also the least comfortable safari, designed for a certain category of tourists. But, as a rule, this category of tourists does not resort to the services of travel agencies and organizes such trips for themselves. Therefore, travel agencies rarely have to deal with a camping safari.
And there are still so-called “hotels on the tree”, the most famous of which – Treetops. The name comes from the real tree houses that European hunters used for hunting animals. Now it is a small, disguised outside tree trunks, a structure on stilts at the watering place of wild animals. Inside there are several small rooms, bathroom, toilet, sink and shower – on the floor; a small restaurant, a bar and an observation deck for observing wild animals.
Kenyan accommodation facilities, whether hotels, lodges or campuses, do not have an official “star rating”: each hotelier determines the level of his establishment on his own. So the list of services in hotels of the same category can vary very noticeably. “Stars” are listed on the websites of tour operators – the results of personal impressions of staff after the inspection of the lodges and hotels.
SEA AND BEACHES
The beaches of the Kenyan coast are covered with soft white sand. The ebb and flow in the Indian Ocean is very tangible, so the water near the coast can sometimes be muddy.
STORY
The territory of Kenya, in the opinion of many scholars, is in the area that has become the ancestral home of humanity. There, on the east coast of Lake Rudolph, tools and the remains of the ancestors of people who lived about 3 million years ago were discovered.
Much later, the territory of Kenya was settled by people who are similar in their characteristics to the current Ethiopian race. Also there lived the tribes of the Khoisan (now South African) racial type. Later, Negroid Bantu-speaking tribes, the ancestors of modern Pokomo, Swahili, and Midiqenda, came from the West.
In VII-VIII centuries, Swahili shopping centers began to form on the coast of Kenya (Lama, Manda, Pathe, Malindi, Mombasa, etc.). They were engaged in intermediary trade between the interior of Africa with India and Arabia. Iron, gold, ivory, horn of rhinoceros, slaves were exported from Africa, and metal weapons, handicrafts and fabrics were brought in.
In 1498 ships of the Portuguese expedition commanded by Vasco da Gama sailed to the coast of Kenya, looking for a sea route to India. At the beginning of the 16th century, the Portuguese captured many port cities on the coast of Kenya, to use them as intermediate points on their way to India.
By the beginning of the 19th century, the slave trade had become the basis of Kenya’s economy. One of the main routes of the Arab slave traders in East Africa ran from Mombasa to the African state of Wang.