Cuba – an island nation in the northern part of the Caribbean 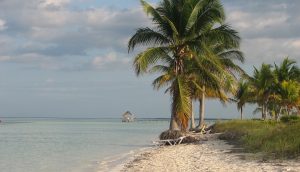 SHOPPING
As a souvenir from Cuba, products and jewelry made of coral in combination with silver, Cuban rum, cigars, CDs with salsa melodies, local musical instruments, T-shirts and caps featuring Che Guevara, art fabrics, embroidery and lace, as well as items made of shell are being brought turtles, especially bracelets and hairpins (beware of fakes!).
Shops are open from 9.00 to 18.00 (some until 20.00) on weekdays, on Saturdays from 9.00 to 15.00 (some until 18.00). Supermarkets and shops in resort areas are usually open from 10.00 to 20.00. Most small shops have a separate mode of operation. Almost all shops close on a “siesta” in the area of ​​noon.
WHERE TO STAY
In Cuba, there are many hotels belonging to the world “chains” (mainly Spanish), food in most cases – all-inclusive with imported drinks. Coastal hotels are usually located on the first line of the beach.
As a rule, check-in on the day of arrival in Cuban hotels is made: at Varadero – no earlier than 16:00, in Havana – no earlier than 12:00.
Hotels in Cuba have the right to evict a guest for drunkenness, bullying, immoral or defiant behavior. As a rule, no other hotel accepts such a guest, and the immigration service will deport him from the country. After that, it is blacklisted and can not enter the territory of Cuba again.
SEA AND BEACHES
All beaches in Cuba are municipal and free. Behind the hotel there are separate sections of the beach, which are protected, there is practically no local population on these beaches. Sun beds and umbrellas – for free.
STORY
Presumably, the first settlements in Cuba appeared in 3500 BC.
The ancient inhabitants of the island – the Indians Guanaquacabits and Siboneys were troglodytes and lived in caves.
Somewhat later, the Taino Indians appeared here. They came from South America and were the most developed of the tribes that inhabited the Antilles.
The first of the Europeans to be here was Columbus, who landed in the east of the archipelago in October 1492. In 1511 Diego Velasquez de Cuellar subdued the indigenous people of the islands, built the fort of Baracoa and became the first Spanish governor of Cuba. By 1514, seven settlements were established. In 1515, Cuellar moved its headquarters to Santiago de Cuba, which became the first capital of Cuba. The colonization took place in the context of the struggle with the indigenous population of the island – the Taino Indians, who made up 75% of the population.
In 1823, the first uprising for independence was crushed.
In 1868, the Ten-Year War for the Independence of Cuba began; the rebels were supported by the USA. Military operations culminated in 1872–1873, but then the rebels conducted military operations only in the eastern provinces, Camagüey and Oriente. In 1878 a peace agreement was signed, eliminating the most unpleasant legislative acts for the inhabitants of the island.
In 1895, a detachment of Cuban patriots headed by José Martí landed in Cuba. This event became the starting point of a new war with the Spaniards, during which the Cubans achieved control over almost the entire territory of the island, excluding the major cities.
In 1898, the United States began the war with Spain, in which they won. Cuba becomes dependent on the United States. The constitution stipulated the right of the United States to send troops into the country. This item was canceled in 1934.
In 1933, as a result of a coup organized by revolutionaries led by Sergeant Fulgencio Batista, the dictator Gerardo Machado-e-Morales was overthrown and a democratic regime established.
On March 10, 1952, Fulgencio Batista carried out a coup d’etat and established a personal dictatorship.
January 1, 1959 the dictator Batista fled from Cuba. At that time, the rebel forces occupied the city of Santa Clara in the center of the island and controlled large sections of the terrain in the east. As a result of the victory of the revolution, the government in Cuba received a government of “left” orientation, led by Fidel Castro.
From the early 1960s to the early 1990s, Cuba was an ally of the USSR, which provided considerable financial, economic and political support, and actively supported the Marxist rebels and the Marxist regimes of Latin, Africa, and Asia.
With the collapse of the Soviet Union, Cuba suffered huge economic losses (up to half of GDP), and analysts predicted the fall of the Castro government would soon, but by 1994 the situation had stabilized, and the economic situation of the country by international organizations is currently assessed as quite satisfactory.
Currently, some observers for the political stability of Cuba among observers are caused by the process of the transfer of power from Fidel Castro to his heirs.
RECOMMENDATIONS AND ADVICE
Due to the humid and hot climate, we recommend to bring light, preferably cotton clothes; swimsuit, sunscreen, sweater or light jacket