Mexico – a state in North America 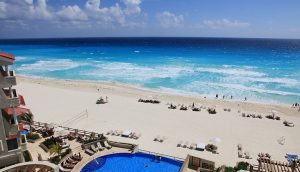 SHOPPING
Shops are open from 10:00 to 20:00. However, from 13:00 to 16:00 almost everything in the city is closed for siesta.
In Mexico, the products of American manufacturers at reasonable prices are widely represented. European goods are very expensive.
Tequila must be brought from Mexico. Taxco is famous for its original decorations of high quality silver, wicker baskets and painted animal figures from wood, San Cristobal de las Casas for woven handicrafts and embroidered shirts, Morelia for sweets, Guadalajara for handmade Huachol Indians, Zacatecas for woven bedspreads and cacti sweets; Merida – blouses, jewelry, hammocks of all colors and sizes.
WHERE TO STAY
Hotels in the country – different levels: from 2 * to a high level of 5 *. The existing classification of hotels is somewhat different from the accepted European – the number of “stars” does not always coincide with the quality of service. Various food options are offered: from breakfast to “all inclusive”, in many hotels there are mostly very spacious rooms, hotels in resort areas have quite large areas.
There are many Cubans and Puerto Ricans among the attendants. They relate to Russians the same way as to all, without dividing tourists “into countries”. But only in hotels of level 5 * the staff more or less clearly speaks English.
In Mexico, there is a mandatory sales tax of 15% of the purchase amount, which must be included in the price. But in some expensive hotels prices are indicated without tax. Therefore, in order to avoid unpleasant surprises, this question should be clarified in advance.
SEA AND BEACHES
All beaches in Mexico are sandy, public, and, as a rule, free.
STORY
Before the discovery of America by the Europeans, Maya and Aztec states existed in Mexico.
1518 – The first landing of the Spaniards on the territory of Mexico (the expedition of the conquistador Juan Grihalva).
1519 – The Spanish detachment of the conquistador Cortes landed on the territory of Mexico, lays the city of Veracruz and without a fight enters the capital of the Aztec empire, the city of Tenochtitlan (Mexico City), where he captivates the leader Montezuma. Soon, Cortez suppressed the Aztec anti-Spanish uprising and became the first governor and captain-general of New Spain.
1520 – Aztec anti-Spanish uprising.
1521 – Cortes at the head of the 10,000-strong anti-Aztec Indian militia conquers the Aztec state.
1522 – Cortez becomes the first governor and captain-general of New Spain.
1524 – Guatemala and Honduras are joined to New Spain.
1535 – The New Kingdom of New Spain was founded with its center in Mexico City.
1810-1824 – The war for the independence of Mexico from Spain, 1821. – the proclamation of independence, 1824g. – The first constitution of an independent Mexico.
1846-1848 – the American-Mexican war, which ended with the rejection of half of the territory that is now part of the United States from Mexico.
1862-1867 – French invasion, in honor of one of the victories in which the Mexicans established a national holiday.
1910-1920. The Mexican Revolution is a period in the history of Mexico, during which there was a civil war in the country, one of the bloodiest in the history of mankind (losses in it, according to various sources, range from 300,000 to 2 million dead, while This population of the country in 1910 was 15 million people). It began as a rebellion against the dictatorship of Porfirio Díaz.
1994 – Zapatista uprising – the national liberation movement in Mexico.
2006 – The Cacti Revolution – thousands of protests against the results of the presidential elections in Mexico, which won the representative of the conservative party “National Action” Felipe Calderon. The very name of this event is perceived by some layers of Russian society as an ideological cliché (by analogy with the Orange Revolution).
RECOMMENDATIONS AND ADVICE
The country has a high level of natural hazards. In addition to the hot tropical sun, seismic activity and volcanism are quite high, with many active volcanoes located close enough to major cities. Around the volcanoes created 12-kilometer security zones, access to which is closed.
Colossal air pollution in Mexico City can also pose a real health hazard.
Smoking is prohibited in most public places. In Mexico, smoking in public places is punishable by a fine of 500 to 1,500 pesos (from $ 46 to $ 139), repeated violation results in arrest for up to 36 hours. Fines for owners of public institutions that allow smoking on their territory, will reach several thousand dollars with the prospect of complete closure of the institution. The only exception made for hotels, however, and in them the number of rooms for smokers should not exceed 25% of the total housing stock.